Nigeria has been having a serious problem with police brutality and violence. And We believe Loop can help solve Nigerias problem. Loop Is a Social Media App Created By Street Genius to help communities control violence and stop police brutality. Loop was created by Edward Thornton with the Aim to help Countries dealing with police curuption .

At least 10 people have died in protests over police brutality in Nigeria...

The the human rights group told CNN police have used excessive force against unarmed protesters since the protests started last Thursday. Nigerian citizen are upset with the law enforcement group SARS which has been disbanded.
SARS refers to the Special Anti-Robbery Squad, a controversial Nigerian police unit that has been the target of nationwide protests demanding an end to police brutality. Police announced Sunday the unit will be dissolved.
The agency said excessive use of force "without justifiable grounds is a crime under international law."
Young men take part in a demonstration calling for the scrapping of the controversial Special Anti-Robbery Squad, or SARS police unit, in Ikeja, on October 8.
A new tactical unit to replace the dissolved SARS will be known as Special Weapons and Tactics, or SWAT.
Former police officers from SARS will be part of the new unit but will undergo psychological and medical examinations to make sure they are fit, according to the inspector general of police, Mohammed Adamu.
"The officers are expected to undergo this process as a prelude to further training and reorientation before being redeployed into mainstream policing duties," said Adamu.

Nigerian Citizens Deserve to be safe

One of the people who died in the protests was identified as Jimoh Isiaq, 20. He was killed by a stray bullets fired at protester. He was standing some distance from the protesting crowd in Ogbomosho, southwest, Nigeria, his family says. 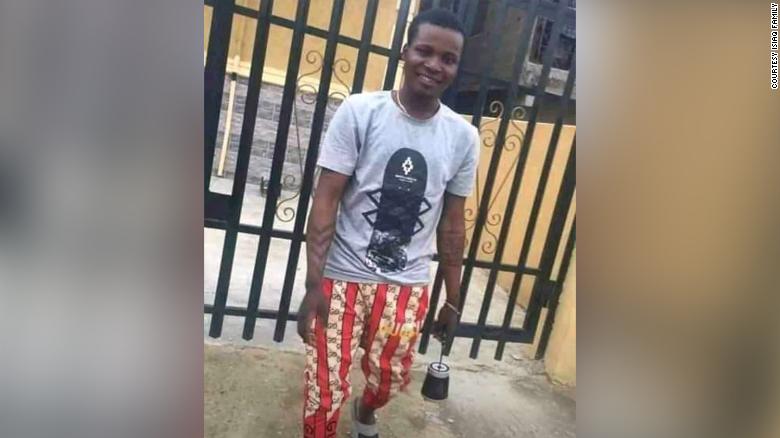 Jimoh Isiaq's family says he was killed by stray bullets fired by the Nigerian police during protests. Police denied they shot at anyone.
The family says it plans to sue the Nigerian police force if authorities don't investigate his killing.
"Three other persons were killed at Ogbomosho (on Sunday) and we have several others injured. We spoke to a lot of people on the ground. The other two are also unarmed protesters shot by the police. 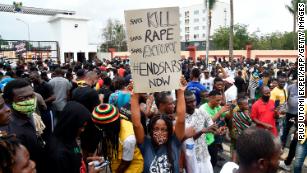 President Muhammadu Buhari said Tuesday, "We also deeply regret the loss of life of the young man in Oyo State during the recent demonstrations. I have directed that the circumstances of his death should be thoroughly investigated."
Another man died Monday in protests in a suburb of Lagos, the country's commercial nerve center, where some parts of the city have been brought to a standstill in the past few days as protesters blocked major roads with their demands for police reform.
The man was identified as 55-year-old Ikechukwu Ilohamauzo. Eyewitnesses said he was a passerby hit by a stray bullet fired by police officers, an allegation denied by police, who blamed "hoodlums," according to local media reports.

Buhari on Tuesday addressed the "genuine concerns and agitations by Nigerians about the excessive use of force, and in some cases extrajudicial killings and wrongful conduct, by men of the Nigerian police force." He said the disbanding of SARS is "only the first step" in extensive police reform.
"We will also ensure that all those responsible for misconduct or wrongful acts are brought to justice," said Buhari, adding that "the vast majority of men and women of the police force are hard-working and diligent in performing their duties."
In other cities, instances of police arresting and harassing protesters were also reported. 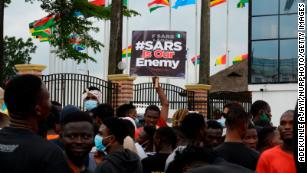 But protesters said verbal assurances are not enough. They also fault the government's decision to deploy officers from SARS into other police units, saying it compounds the problem.
They say their demands have now shifted from a targeted ban on a particular unit to overall police reform.
"Protesters are still being shot and killed and the government is talking about ending SARS. The protest has moved from ending SARS to ending police brutality in general. The government, which claims to have banned SARS, are still killing protesters. This is a fluke," said Okoye Paul, who has been a part of the Lagos protest since last week.